What does "ept" mean? 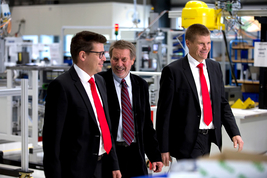 ept means "electronic precision technology" and stands for the high standards of quality we are committed to.

Family Operated and Globally Active
As a quality provider based in Germany, we provide our customers worldwide with sophisticated products. As an independent and family-run company, we have the flexibility that enables us to react quickly to your present and future requirements.

You Benefit from Our Experience
More than 40 years of experience have taught us how highly our customers value the ability to provide complete solutions from a single source. That’s why we are constantly expanding our portfolio of connectors. You also benefit from our experience in the areas of industrial electronics, telecom/datacom, and automotive electronics.

ept connectors are used throughout the world for a variety of demanding applications such as data processing and communication, control and measurement technology, vehicle construction, transportation, military technology, air travel, and even space travel.
ept’s core competencies lie in developing and producing connectors that rely on press-fit and soldering technology, as well as machines for processing and tools for press-fit technology. Our innovative ideas for products and our first-rate production techniques enable ept to offer you complete and comprehensive solutions from a single source for all of your connector and processing technology needs.

Based in Peiting, Germany, ept develops customized automotive solutions that are produced at multiple sites (Peiting, Augsburg, The Czech Republic). We also plan to begin manufacturing in China in the near future. In addition, we have been operating a plant in Chester, Virginia since 2008.
ept’s approach to connecting circuit boards mainly focuses on press-fit technology using the Tcom press® zone, a solution developed and successfully implemented by ept. The solution has been approved in the automotive industry for years and has proved its mettle in a range of applications.

ept GmbH was founded in Buching in 1973 by Bernhard Guglhör under the name ‘Bernhard Guglhör Präzisionsteile.’ To this day, there is still an ept GmbH plant in Buching, where experienced toolmakers and engineers focus on developing and producing our own processing machines and tools.

Since 1979, ept GmbH has been based in Peiting, which is where the electronics company’s success in the international arena first began. Today, the company has plants in the Czech Republic, the U.S., and China and maintains a worldwide distribution network. Already since 2005, the company has been certified for ISO 9001:2000, ISO/TS 16949:2002, and ISO 14001:2004.

In its more than 40 years of history, the company’s success has largely depended on in-house product development. Back in 1980, the company had already successfully introduced the DIN 41612 connector, which would later be followed by product groups such as PC/104 and PC/104-Plus, hm 2.0, Advanced TCA, and Micro TCA, as well as the SMT Colibri connector system for COM Express applications, which was introduced in 2012.

In addition, Tcom-press, a press-fit solution developed by ept, was approved for use in automotive applications as far back as 2001.
And numerous product developments are planned for the coming years – plans that will enable the company to build on its reputation as a manufacturer of precision technology.

Would you like to get to know us personally?
We look forward to your visit!